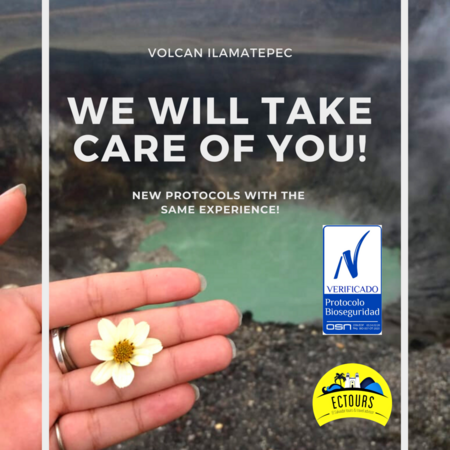 Santa Ana, Izalco Volcano, Cerro Verde and Coatepeque lake, this consit tour is to visit the Cerro Verde National Park where you able to enjoy the nice weather with the perfect view of the Santa Ana, Izalco Volcanos and Lake Coatepeque, there is also the option of climbing the Santa Ana volcano, where you can see the crater that has a sulfur lake with an spectacular color at the end of the day we stop for a great lunch at the Coatepeque Lake..

The Cerro Verde used to be home to a 4 star hotel called "Hotel de Montaña - Cerro Verde". However, due to strong earthquakes in 2001, it is currently not open to visitors. It serves as a reminder of the area's beauty and danger. It's a great place from which to photograph the Izalco Volcano.

This experience is about to visit the Natural Reserve "Complejo Los Volcanes" , where you´ll have the opportunity to enjoy the perfect weather with an awesome view of Santa Ana, Izalco Volcanoes and Coatepeque lake.  if you are adventurous, there is the option to hike the Santa Ana volcano, where you are able to see the crater, which has a sulfur lake with an spectacular color, the hike is around 4 hours round trip. At the end of the day we will stop for  late lunch at the Coatepeque Lake to relax,  swim and enjoy the great food.

Coatepeque Lake Coatepeque Lake is located in a volcanic crater about 25 square kilometers. According to historical records, between 72,000 and 57,000 years ago, there existed a volcano with the same name and recorded a strong eruption that left the huge crater . It is located 760 meters above sea level , 53 km from San Salvador and 12 kms from the city of Santa Ana. It is surrounded by Cerro Verde and Santa Ana volcanos and very close to the Izalco volcano. You will enjoy stunning views from any point above the lake. In addition, the lake often becomes a beautiful turquoise. Authorities say it is due to a species of algae that allows for the coloring. On site are hotels and restaurants are available, as well as, boat services for tours through different parts of the lake, including the two peninsulas that form part of the site: "Goggles" and the island of Cerro. You can also enjoy water sports such as swimming, diving and water skiing.

Ilamatepec is the real name to the tallest volcano in El Salvador and located in the department of its same name: Santa Ana. The Santa Ana volcano is 2365 meters above sea level. The volcano has four craters and one of them held a sulfur lagoon until its most recent eruption, October 1, 2005. From that day on, the volcano has been continuously monitored and warnings remain active along the area. You have the option of hiking this volcano.It takes four and half hours to hike. It is recommended only for people who are in good physical condition.

The Izalco volcano The Izalco volcano is the youngest volcano in El Salvador. Izalco was born from a sulfur vent arising from the ground in the year 1770 and kept constant activity until 1967 when it suddenly stopped erupting. Prior to this, the lava coming out of the volcano and the constant flares could be spotted from the Pacific Ocean. Because of this, the volcano got the nickname, "Lighthouse of the Pacific". One can easily hike up the volcano from the Cerro Verde National Park in about an hour and a half, but guidance from the PNC is probably a good idea. The can be arranged at the main gate at Cerro Verde National Park.

Cerro Verde Volcano
The Cerro Verde is actually an extinct volcano which last erupted approximately 2500 years ago. On the top of the crater, there is a cloud forest, located at 2030 meters above sea level. The other two impressive volcanoes - Santa Ana and Izalco - can easily be observed from the look-out spots located within the park.

Together, they form one of the most awe-inspiring landscapes in the whole country. These 3 volcanoes are located in the departments of Sonsonate and Santa Ana. They are approximately 67 kilometers from the capital city San Salvador.

This tour begins with a visit to the Cerro Verde National Park where you will enjoy nice weather with perfect views of the Santa Ana and the Izalco Volcano, as well as, Lake Coatepeque. You have the option of climbing the Santa Ana volcano. When reaching the top, you will see the crater with a beautiful sulfur lake. At the end of the day, we will stop for lunch at Coatepeque Lake.s