​​​HIGHLIGHTS OF THE TOUR

San Andrés (formerly known as Campana San Andrés) is a pre-Columbian site in El Salvador,[1] whose occupation began around the year 900 BC as an agricultural town in the valley of Zapotitán in the department of La Libertad. This early establishment was vacated by the year 250 because of the enormous eruption of the caldera of Lago Ilopango, and was occupied again in the 5th Century, along with many other sites in the valley of Zapotitán. Between 600 and 900 AD, San Andrés was the capital of a Maya polity with supremacy over the other establishments of Valle de Zapotitán.
The residential area has not yet been well studied. The investigations and excavations in San Andrés have been primarily of the political-ceremonial center and have revealed that it was divided into the South Seat (from which they governed) and the North Seat. In the year 600, the South Seat was filled with adobe (leaving a tunnel leading to the original seat) to construct the Acropolis, which contains ceremonial and political structures. In the ends to the South and East of the Acropolis are pyramids or structures: 1 (the main pyramid), 2, 3 and 4. In the North ends and the west are a series of rooms where the governors lived (the last palaces of San Andrés) of which two have been reconstructed. To the south of the Acropolis lies structure 7, another ceremonial structure. In the North seat, or Great Seat, is the pyramid or structure 5 (called "La Campana" - the bell) which is united with the Acropolis behind structure 6 (which has the shape of an L). Around structure 5 are the structures where commerce took place.
Archaeology demonstrates that San Andrés had strong contacts with Copán and the Guatemalan Highlands,[1] and received goods from such distant places as the present territories of Petén and Belize. San Andrés collapsed as a political center towards end of the 9th century. The last evidence of pre-Hispanic activity in the site was between the years 900 and 1200 as a residential site that consists of a final layer with fragments of censers and ceramics painted with scenes of sacrifice in Mixteca-Puebla style, which belong to a new cultural phase, named Guazapa, related to the pre-Hispanic city of Cihuatán.

The circumstances of the volcanic event led to the remarkable preservation of architecture and the artefacts of ancient inhabitants in their original positions of storage and use, forming a time capsule of unprecedented scientific value that can be appreciated in present times.
Underneath the layers of volcanic ash, the best preserved example of a pre-hispanic village in Mesoamerica can be found, with architectural remains, grouped into compounds that include civic, religious and household buildings. To date, a total of 18 structures have been identified and 10 have been completely or partially excavated. All structures are made of earth and important features like thatch roofs and artefacts found in-situ have been recovered. The excavated structures include a large community (public) building on the side of a plaza, two houses of habitation that were part of domiciles, three storehouses (one was in the process of being remodeled), one kitchen, and a sweat bath. On the northeast side of the plaza there is a religious building devoted to communal festivities and one where a shaman practiced. Rammed earth construction was used for the public buildings and the sauna, and wattle and daub (which is highly earthquake resistant) for household structures.

Joya de Cerén Archaeological Site
Joya de Cerén was a pre-Hispanic farming community that, like Pompeii and Herculaneum in Italy, was buried under an eruption of the Laguna Caldera volcano c. AD 600. Because of the exceptional condition of the remains, they provide an insight into the daily lives of the Central American populations who worked the land at that time.

The Maya ruins of Tazumal

Tazumal (/täsuːˈm äl/) is a Pre-Columbian Maya archeological site in Chalchuapa, El Salvador. Tazumal is an architectural complex within the larger area of the ancient Mesoamerican city of Chalchuapa, in western El Salvador. The Tazumal group is located in the southern portion of the Chalchuapa archaeological zone.[1] Archaeologist Stanley Boggs excavated and restored the Tazumal complex during the 1940s and 1950s.[2]

Archaeological investigations indicate that Tazumal was inhabited from the Classic period through to the Postclassic and that the site had links as far afield as central Mexico, the northern Yucatán Peninsula and lower Central America. Metal artefacts from the complex date to the 8th century AD and are among the earliest metal artefacts reported from Mesoamérica.​ 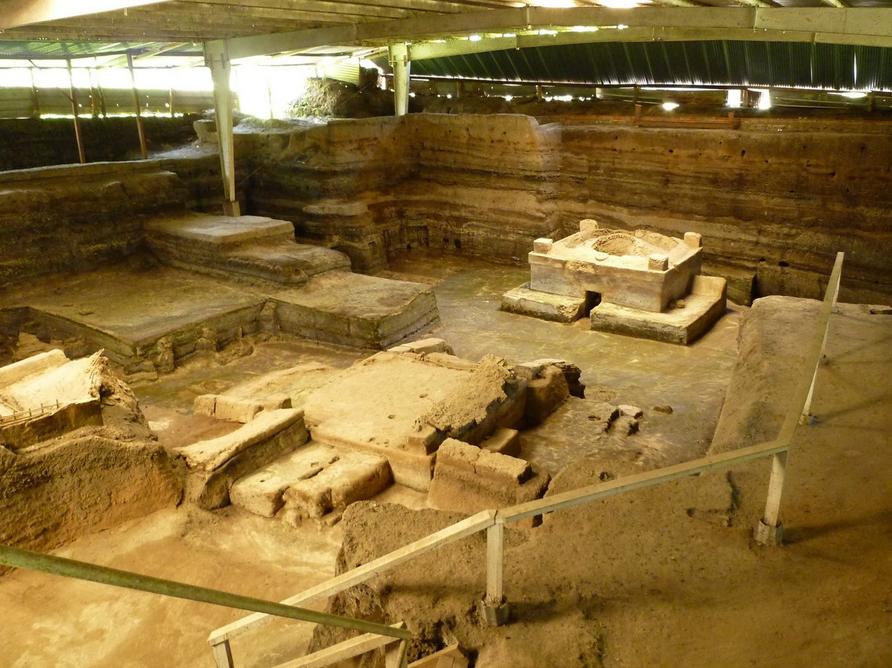